A Scottish location, Scottish actors and previewed in Scotland; we really do know how to make a movie. 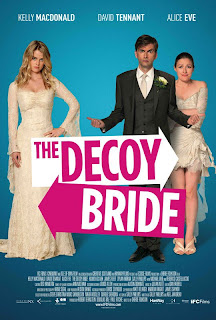 The Decoy Bride, one of the 239 films that the Glasgow Film Festival is offering this week, was previewed at Glasgow’s Cineworld on Tuesday and Wednesday of this week, although disappointingly it has been available online in America since the beginning of February.
The film, written by Neil Jaworski and Sally Phillips was directed by Sheree Folkson, who has worked with the TV hit show Ugly Betty in the past.
The Decoy Bride stars a much loved David Tennant as James Arber, an English writer who is marrying Hollywood actress Lara Tyler (Alice Eve). When the press find out about the wedding, located on a remote Scottish island, Katie NicAoidh (Kelly McDonald) is brought in as a decoy bride to try and put them off the scent.  This isn’t any ordinary love story as the description would have you believe.
The film has a fantastic cast including Michael Urie, best known for his role as Marc from Ugly Betty, and Hamish Clark, a Scottish actor who played Duncan in the BBC TV series Monarch of the Glen.

The cast over the description was what made it appealing to me before I walked into the cinema theatre.
However, throughout the film I couldn’t help but find myself laughing out loud at the plot and the characters; obviously written and created by comics. Kelly McDonald’s role as Katie was played brilliantly; she is an actress who has definitely proved her worth in this starring role.
The roles of the Scottish islanders were also utterly hilarious, if not overly stereotypical – but the stereotypes in the film definitely made the storyline what it was.  Without that, it would have just been the romantic comedy that I had first suspected.
However the film has only received 5.3 out of 10 on the Internet Movie Database so far; personally I would say it deserves quite a bit more than that.  It is still early days though and when it is officially released on the 9 March in the UK we will soon get to see whether the rest of the UK agree with the portrayal of the Scottish island.
And if you think you have missed out on the Glasgow Film Festival, don’t worry; there are still viewings and tickets of shows yet up until Sunday 26th. Check out show times and book tickets here: