As Americans are beginning to doubt the death penalty and whether it is humane or effective I am left wondering why they are questioning it yet again. 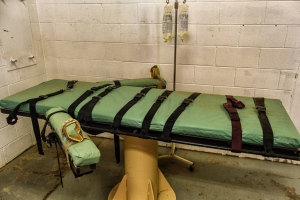 80 people were sentenced to death in America last year. Photography by Ken Piorkowski.

The United Kingdom abolished capital punishment officially in 1998 and so far has never had another debate over it – despite the huge influx of prisoners costing the tax payer £27,000 per head per year.

Even the death row inmates are becoming wise to the fact they live in an unsure society.

Death row inmates are beginning to challenge their sentencing dates after a prisoner in Oklahoma had his delayed by six months over an investigation into the drugs used.

Charles Warner has won in his appeal to push back his extermination until the investigations into the botched execution are over, and another prison in Texas, Robert Campbell, is also attempting an appeal.

The argument is not about why the lethal injection went wrong, it is about why it takes only a glitch like this to spark off a new trepidation over the whole debate yet again.

The problem which started it was all was the execution of Clayton Lockett where a new cocktail of drugs meant he was still alive and in pain for almost forty minutes after they were injected.

In the case of Lockett I wonder whether it is right to be worried over the pain he was in before he died. He did of course rape and shoot a teenager, bury her whilst she was still alive, which then lead to her murder. I am pretty sure his victim was in torment for longer.

The logistics should never be a problem; every state in America does it differently. The death penalty is still practiced in over 50 countries in the world.

The debate is never ending, the value of life, the cost, the right to live, does it work as a deterrent and so on.

However, as those in America foolishly juggle back and forward the ethics of the process and ponder over their choice to keep the death penalty in the first place, they are only making the deterrent of a death sentence weaker and the power of the inmate stronger.

How many more appeals and arguments will these convicted criminals put forward to prolong their lives a little bit longer? Whilst we are on the topic, why is life in death row so good that they want an extra six months anyway?